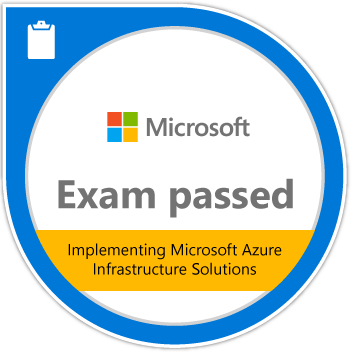 An Updated Exam and Exam Format

I sat the 70-533 exam last Wednesday. It was the version after the Jan 2018 updates. That last bit is critical. Cloud moves fast and Microsoft published the exam 4 years ago. It was originally based around ASM, the white and blue GUI and a different set of PowerShell commands.

It also had a number of other concepts which have been migrated over that time into Azure Resource Manager as a deployment method.
Initially that had me concerned as I came to Azure 12 months ago fresh onto ARM. It was new at first but I didn’t have any ASM baggage. I saw the exam still had lots of ASM content when I looked into it last summer. But there have been TWO updates to the exam since then. One in October 2017 and one in January 2018. These removed old content such as ASM and most of the SQL PaaS objectives.
There is also a style of question on the exam which forms a set. Once you start one of these sets you can’t go back and forth to change your answer. This isn’t bad, it just needs you to remember that you can’t use later questions to go back and change an answer you now realise is wrong.

Areas I focussed on

Not having to learn the old ASM stuff I was never going to use, and I had used ARM for a year, so that was good. I hadn't done very much on the WebApps or on the very latest additions, like Azure Container Services, so had to brush up on: * Non ARM Powershell commands as some of those are still used as not all features/services are fully ARM based yet * WebApps - A big topic, but I work mostly in the IaaS/PaaS space but not on developing WebApps, so had to practice deploying them, staging slots, load balancing and traffic management to them * Diagnostics - This was OK for me as I had done a lot of work with OMS. OMS is going away as a product, but most of it's monitoring features are appearing in Azure Portal. * SQL/PaaS - Whilst this has mostly been scrubbed from the exam objectives I would still recommend having an understanding of the basic service offerings and levels for SQL PaaS * The new 2018 updates such as Containers (ACS) and Key Storage (KeyVault) should be on your list too.

The main focus for my study was Scott Duffy's Udemy Course. This costs between £10 and £15 depending on what wild discount Udemy is applying at the time. It's a great course. Good Length. I watched/listened on 1.5x speed and got through it in 4-5 days watching when I had time to revise. It also contains updates, including details about the January updates and examples of KeyVault and Containers. Very good value. 5/5! I used my company's Enterprise Subscription. But to be honest for less than $20 I think you could do the same in a private/free-tier subscription if you were careful and deleted/powered-off things sensibly.

I went into the exam a little unsure. I had seen a lot of posts about people doing the exam before January and talking about ASM and SQL still being quite prevalent. There was also the very new features such as Containers that I've never used before, I also knew my AZ CLI was weak sauce. Despite all that I was out in under an hour with a score of 850.

If you have 6-12 months experience. Have used ARM templates, know about or can try some AD federation/sync and can afford £15 for Scott's course, I think you're good to go with this exam.